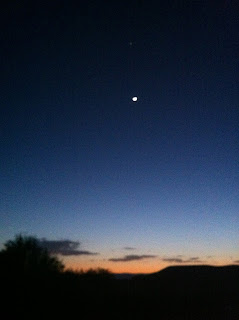 I awoke last night feeling really thirsty which drove me out of a warm bed. I looked at the clock passing by it and read 3 am. The little dogs heard me scoot out of bed and followed me into the kitchen hoping to get something from the fridge. Unfortunately for them at that hour of the morning I was on a one thought mission which was filling up a glass with water from the cooler by the counter. Finding it I drank greedily as it took awhile to fulfill my thirst. On the way back to bed I did however take the time to scratch a few heads of pleading dogs asking for anything that I had.

As I was laying my head back down hoping to fall asleep I started to hear someone talking in Spanish. Now, if you know me, my mother was very disappointed that I didn't study Spanish in school and that I took French instead, which I loved. Both of our children took French and one is still studying it. So at 3 am in the morning I found it a bit awkward to find myself repeating what I was hearing out loud in whole sentences. It took me a minute to realize that my husband and I were not alone in the room and the way the words were being expressed they weren't talking to me, meaning there was someone or others there with us. 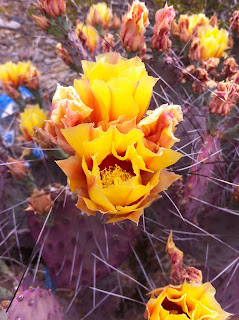 "Great." I thought knowing that the pets had already gone to their beds and snuggled up in their blankets. It was early and I was a bit envious that I could hear my husband breathing softly in his sleep undisturbed. I decided to go ahead and acknowledge the ghost in the room in the few words of Spanish that I know and as soon as I did the talking stopped. Frustrated I expanded my energy out into the room looking for my guest and anyone else who might have been there. Sure enough I found two other energies besides the talker that I could feel backing out of my energy fields. I kept my energy expanded through out the whole room until everyone left. I wasn't trying to drive them out, I only wanted to let them know I was there. From their response it felt like I had crashed their little party and they were not in the mood to talk to the living. In a way I was glad, as Spanish is not a language that I am good at. I closed down my fields and tried to go back to sleep which took another hour since I was wide awake.

This morning I tried to sleep in but could hear the pets getting up with my husband sending him off to work and then they came to wake me up for breakfast. I didn't mind but still a little sleepy from being awake last night. I didn't see or hear anyone in the house as I got my tea and was padding around doing my morning chores but that can always change...